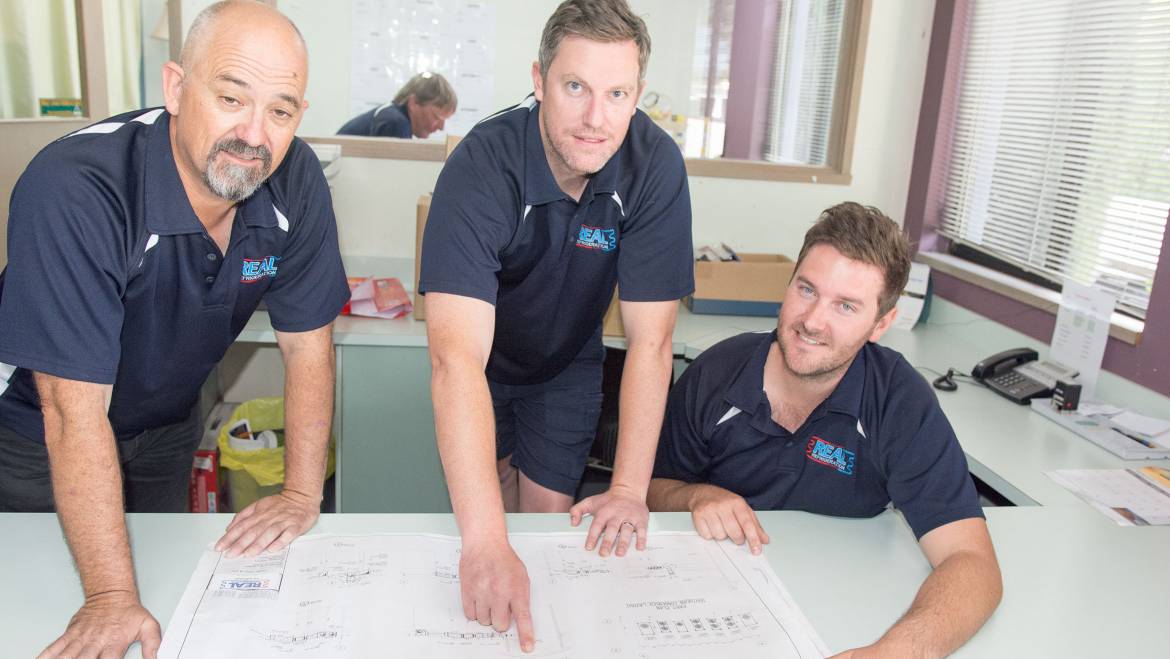 REAL Refrigeration & Air-conditioning CEO, Trevor Cheeseman joined the family business when he was 12 years old, after the family had moved from Sydney to Bendigo to take over a Road House. Working alongside his Dad he learnt the noble art of pumping petrol and how to deal with the public.

Trevor never forgot the huge importance of excellent customer service. Apart from always looking neat and tidy he had inherited his father’s big smile and picked up very quickly on how to wash windscreens. Not afraid of hard work Trevor further supplemented his income by working in the local supermarket after school.

He left school at 16 because he’d decided he wanted to get a trade apprenticeship. Not having a natural bent toward building, painting or plumbing he’d always wanted to rebuild and redesign things. With an older brother who was already a refrigeration mechanic young Trevor thought that might be a perfect fit. He carried out a bit of research and found that refrigeration and air conditioning had a great mix of electrical, mechanical and thermodynamics, which really intrigued him.

Apprenticeships were very difficult to get in those days so he had to find a ‘point of difference’ for him to be taken on over the other applicants. Thinking outside of the square he came up with the idea of offering to work for nothing to get a foot in the door. Not only did his idea get him an apprenticeship in a family business in Bendigo, he was actually paid for his first week in the job! Another stroke of good luck was that the owner of the business was in his 70s and had acquired a lifetime of remarkable skills across Australia as well as a huge knowledge of refrigeration systems. Over the next four years Trevor acquired an invaluable insight and understanding of what the industry had been like in those early times and how it had evolved to the present day. He passed his apprenticeship with the skills of a commercial and domestic qualification in both refrigeration and air conditioning.

With a qualification under his belt Trevor decided to take a sabbatical from his studies and set off travelling around Australia. He started with grape picking in Mildura, then moved on to taking a bit part in the 1990 Boney movie filmed in Wentworth NSW, as well as a couple of weeks attending a Jackaroo school in the Yarra Valley.

The world was about to become his oyster… until he answered an advertisement to repair refrigerated containers on the docks. He worked there for 6 months, learnt a bundle of new skills and met a whole new group of people on the big ships that came in and out of the docks.

However as Alvin Toffler, the best selling author of ‘Future Shock’ said, “There is nothing so constant as change!” Trevor swapped the sea and the big ships for the chance to drive ski buses on Mount Buller for five winter seasons, mixed with half of each year working summers in Alice Springs, Adelaide and Mansfield. It was after the last summer when he was working in Mansfield that he met ‘the good woman in his life’ Bernadette or Bert for short. Trevor’s ever changing life story continued again, with another two and a half years working with a Melbourne based company where he focussed on supermarket refrigeration.

Moving to Albury to open-up a new branch office for the company, Trevor spent three valuable years learning the principles of project management.

When that business closed, to use his own words, Trevor, wanting to move back to Mansfield, left Albury with his newly married Bernadette, ‘kicking and screaming’ and only got as far as Rutherglen where they purchased an established refrigeration business with a small staff. He learnt a lot about running a business, but was still seeing business issues through the eyes of a refrigeration technician rather than as a businessman.

At this unexpected time in his career, the opportunity came to work at Uncle Toby’s in a management role. For nearly three years he had a fantastic chance to work with and understand the skills of people management, compliance and change management. He very quickly moved from Food trade to Shift Team Leader and then to Production Team Leader where he managed up to 50 people at various times.

The final pieces of the jigsaw had started to fit together. With the assistance of a skilled business mentor Trevor realised that he had to completely change the way he was thinking about business operation and development.

With a new perspective on business management Trevor set out to introduce a proactive, administration driven culture which included thinning out a top-heavy level of management and introducing multi-skilling across the business.

His brother decided to return to Sydney, so Trevor bought his share out, and ‘leaned down the office’ introducing a different business structure. With the approval of his team he changed the name to REAL Refrigeration & Air-conditioning, signalling a new dawn for what had become a closely working crew.

By utilising technicians who could assist with the business operation as well as ‘working on the tools’ Trevor has now created a strong, effective and cohesive team of workers who have embraced proactive operation and growth.

The re-invented business is in safe hands!